Foreign currency transactions are regulated by the Federal law № 173-FZ "On Currency Regulation & Currency Control" from the 10th of December, 2003 and other federal laws adopted in accordance with 173-FZ and legal acts on issues on foreign exchange regulation.

As a currency control agent, OTP Bank provides the following services to its clients:

In order to improve service quality, the Bank provides a service to pass currency control documents and supporting documents (agreements, invoices etc.) via Internet banking system. The Bank acts as a currency control agent on the basis of electronic documents: it signs the passports of deals, executes clients’ foreign exchange transactions without clients attending the Bank’s office.

Currency control over transactions of resident companies, individuals and entrepreneurs which are engaged in private practice

Currency control over transactions of non-residents

Requirements to documents to execute functions of a currency control agent

Currency Control over Transactions of Non-Residents

The currency control legislation does not set special requirements for non-residents to execute payments in a foreign currency.

For settlements in Ruble non-residents must complete payment documents correctly, following Bank of Russia Instruction of 04.06.2012 г. № 138-I.

Completing the Field "Purpose of Payment" in a Settlement Document while Executing Payments in Favor of Residents. 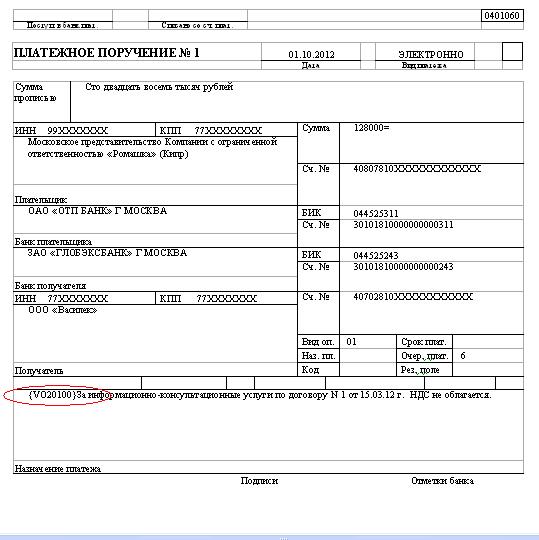 A non-resident must enter a currency transaction code in the field "Payment purpose” before a text in accordance with Appendix 2 to Bank of Russia Instruction of 04.06.2012 № 138-I The code confirms a payment purpose and reflects economic nature of an executed transaction. The payment purpose must be written in such a way as to enable the bank employee to check that this code confirms to the nature of the deal. This information is to be put in curly brackets and have the following format {VO< currency transaction type code >}. Indents (spaces) inside curly brackets are not allowed. Separating characters "VO" are put in capital Latin letters (for instance, {VO70010})

If it is not possible to check correctness of a currency control code in the field “Purpose of payment: the bank refuses executing this transaction until required information is provided.

In accordance with Article 25 of Federal Law № 173-FZ «On Currency Regulation & Currency Control», dated from the 10th of December, 2003 residents and non-residents are liable for violation of the Russian Federation currency legislation acts and acts of currency regulation bodies.

Article 15.25 of Administrative Offences Code of the Russian Federation of 30.12.2001 № 195-FZ defines the enforcement actions applied to residents and non-residents for violating RF currency legislation.